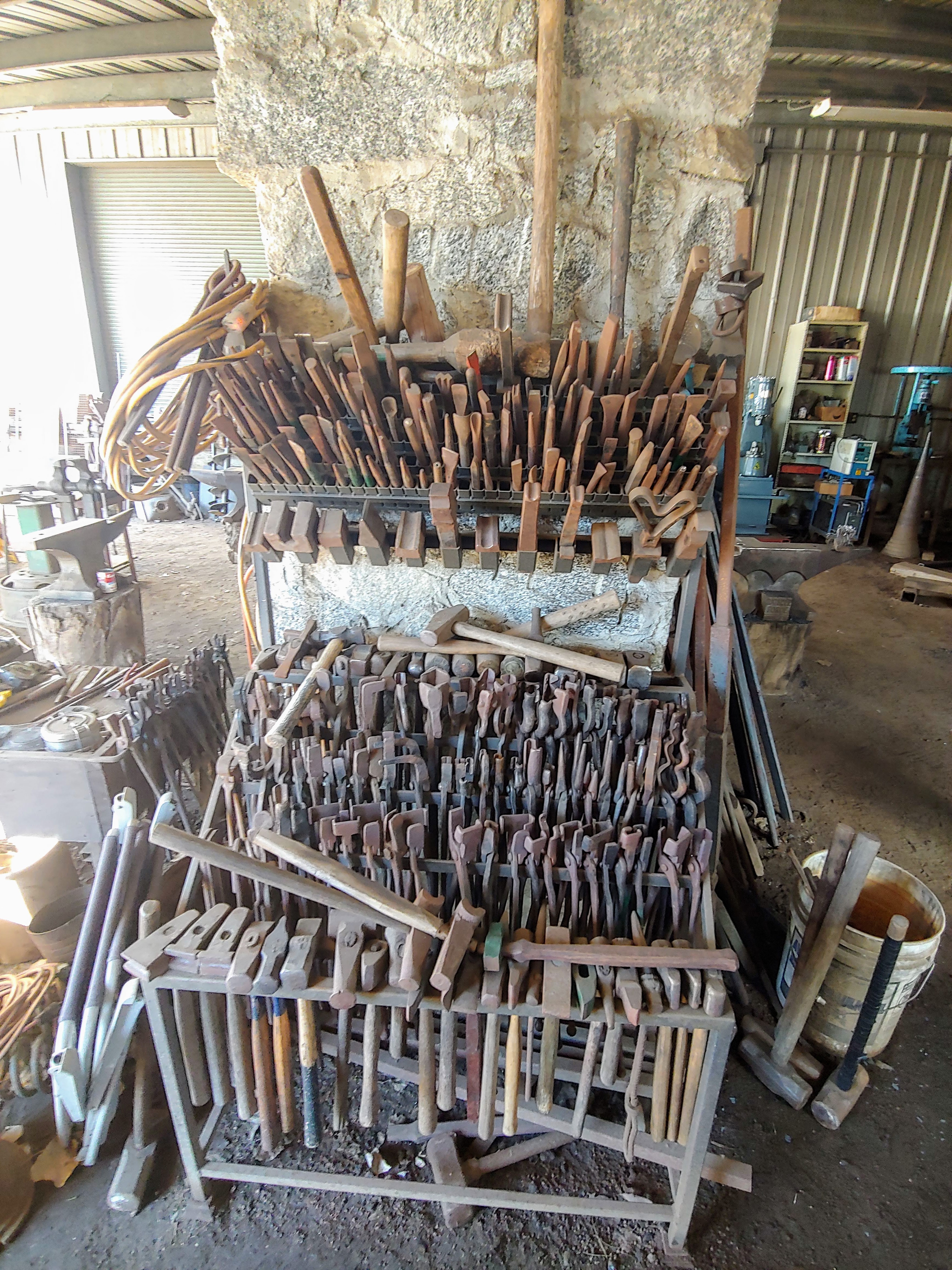 A History of Blacksmithing: From Fire to Art

In the early history of metal working a person who formed metal came to be called a smith. As we learned to make and use a wide variety of metals, a distinction evolved based on the color or type of metal worked. Coppersmiths worked in copper and its alloys. Silver and goldsmiths worked in their respective metals. Blacksmiths worked iron and steel, the black metals.

Before the Industrial Revolution, the civilized world revolved around the blacksmith. In the United States, and especially in the west, the word "blacksmith" calls up the image of a man shoeing a horse. This is only one role the blacksmith played. In the 1800's he was the master of all things mechanical. All trades relied on him for their tools and hardware. And since iron improved the useful life of working livestock, he also shod horses and oxen. During the Industrial Revolution blacksmiths were called upon to design and build the very tools and machines that would render them obsolete
by the 1930's. Relieved of the responsibility of providing the bulk of everyday tools and products necessary to modern life, there remained a
small demand for art and architectural pieces.

I got started in blacksmithing at the age of 8 when I inherited a forge and anvil from my grandfather. I read all the old books I could find on the subject and built my fires with small pieces of oak since I didn't have access to coal. The high school I attended offered a course in horseshoeing which I took my junior and senior years. This was the first time I got to use a coal fire. Since I already had years of experience in the forge the course was pretty easy for me and I helped teach it my senior year.

After I graduated I continued to teach the Farrier class while I was attending the local Junior College. My major was in agriculture, but the college had a great metal shop so I took most of the metals classes also.

In 1978 I joined the California Blacksmith Association. This was a real boost to my development. For the first time, I could talk to others that were doing the same things and having the same problems. The first conferences I went to were overwhelming. There was so much to see and learn. Working with the professionals in the group I quickly picked up many advanced techniques.

From 1984 through 1986 I attended CSU Chico to finish my B.S. I drove back to Sacramento every weekend to shoe horses and do any jobs that had come into the shop. The horseshoeing was my major source of income throughout this period as the market for good ironwork in Northern California was nonexistent. It really helps to have a trade that can provide a reliable cash flow.

After I graduated from Chico I worked at Meirs and Company in Basalt, Colorado for a short time and then went back to Sacramento to see if I could create a market for forged ironwork.

During the summer I started doing an educational exhibit at the State Fair. This proved to be a great way to inform the public that forged metalwork was still being done and was available. Between the fairs, some articles in the local newspapers, and a TV story on the news, orders started coming in for everything from nice fireplace sets to large gates and railings. And most of the orders specified forged designs instead of tubing and castings.

I still do almost anything that comes through the doors, but the horseshoeing is down to a few old customers

Have a Project In Mind?

Take a look at our gallery on our site. We would be happy to help you with your design.